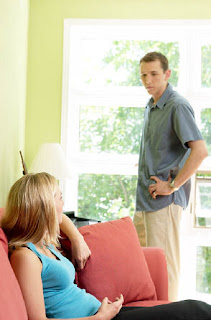 Earlier we gave the example of the wife who ridicules and seeks to undermine her husband’s inner faith and independence. Many, if not most, wives are possessive of their husband’s loyalty when it comes to a man's relationship with God. Many wives secretly resent and fear a man’s inner bond with his Creator. A man must have a devil-may care-attitude toward what others think of him. If he sees a right course to steer, then he must be like Noah, Moses or Columbus, inwardly inspired.
It takes a lot of wisdom for a woman to see that if a man loves principle and the God of principle more than her--then he is the man that can be trusted. He will be loyal and honorable toward her precisely because of his love of principle. Unfortunately, few men have such a bond. But that, gentlemen, is what you must find. And you must find it within.
Don’t expect emotional support from your wife. A wife can be a tremendous helpmate. But if you look to your wife for support of who you are or what you do, you are casting her into the role of God, and the temptation in her will rise up to enslave you and rule you.
Frankly, it’s almost better to have a wife that tries to cast doubt on every move you make, because that way, through your suffering (and seeing her agony) you will learn to be a man and look within for support.
The man whose wife is very supportive of everything he does very often finds her in charge of his life instead of his being ruled by inner principle. He becomes dependent on her support. She becomes a grace robber of even technically proper actions. Many a man has turned over the religious upbringing of the children to the wife.
If he really had a bond with internal intuition, he would see that it is his responsibility as husband to oversee the very delicate care and protection of his children’s souls.
Most men wash their hands of the child’s education, turning authority over to the wife, the external church, the educational matrix, so-called experts and the bureaucrats. Then when things go wrong, he sits in the cat bird seat and blames her instead of seeing that it was his own wrong and weakness that is to blame.
Often bosses, bartenders, the other woman, or the support group are just substitutes for the nagging wife he gave power to and then ran from.
Most men become little more than yes-men, rubber stamping whatever their wives or bureaucrats decide.
Some of the children of the characterless father who leans on his wife for support will grow up to be characterless conformists, stooges and shills for the worldly system, and addicted to its perks, just as he was.
Some of the children, especially the more perceptive ones, will rebel against the nagging authority of mom or the arbitrary, condescending, or even wicked authority of strangers. Their mistake is in rebelling out of anger and resentment.
Such children look bad. Though most of their acting-out is actually a cry for true love which should come from the father. Mom cannot really be blamed either, because she’s simply stepping up to fill the vacuum caused by dad’s absence or abdication.
Some women are power hungry and love the power they get. Decent women are troubled by the responsibility handed over to them. They wish their husband would step up and take his proper fatherly role, but most of the time he is more like a big kid himself.
Giving up blame.
Once again, I’m not blaming moms. Dad is responsible. If the suffering of his wife and children does not waken him to see his need for understanding, wisdom and courage--then nothing will. Blaming his wife is just another cop out for his own failing. It's another way his ego finds to make itself look blameless.
Many women are single moms nowadays. She has no choice but to do the best she can without a husband there. The first thing she must do is learn to not resent and judge her former husband, boyfriend, her dad, or men in general. The men failed her; but through understanding gained from meditating, she will come to see that all men are failures. A few men will wake up; most won’t. Their weakness tempts her to play the role of his ground of being and then resent him when he falls for her temptation. But this no-win game must stop.
As Ann Landers said: “It takes two to tango. It also takes two to tangle.” The decent woman must awaken to see her own role in failing relationships. When she does, her dropping of resentment and judgment will open up her own heart to receive grace and inner love from her Creator within.
Some men are cads. But many men are decent. They might even one day find themselves and grow to be very noble. But the hard time that many wives give their husbands keeps them resentful and fixated to pleasing or appeasing her. In this type of resentment-based pressure cooker of suppressed emotions, he may not have enough space to find himself.
In most marriages, both remain asleep, fixated to each other through resentment, blame, and guilt. In some marriages, one person wakes up and stops playing games. Sometimes the new found awareness of the one will help the other wake up. If this happens then both will bring into being a heaven on earth. If only one wakes up, that person must suffer in dignity. At least that person will stop supporting the wrong in the other and adding fuel to the fire.

If you as a man are beginning to wake up, here is a little advice. First, bear the pain of seeing your own failing and wrong in quiet dignity. Mourn in private, but go out into the world with a cheerful countenance. Your wife, who you have been abusing through anger (which makes her in charge of your beastly self) or through wimpiness, will undoubtedly not believe your new found grace.
.
Don't ask for her forgiveness (which again puts her in the God role). Apologize for your past wrongs, and say that from now on things will be different. Chances are she will test you for a long time to see if you are sincere. This will be your chance to practice longsuffering, forbearance, patience, and wisdom.
.
Above all, before you begin seeking to correct others, make sure that you, yourself, are coming from a good place. Obtain a copy of the meditation we offer (the introductory version is free) and practice it to help you be calm and reasonable.

I know many of you who are starting to wake up face very difficult circumstances you have brought on yourselves. Divorces, rebellious children, health problems, and financial problems can sometimes appear almost impossible to solve.
However, with God all things are possible. Just remember to put first things first. Meditate for objectivity. Then through objectivity will come understanding and patience. Do not seek to role up your sleeves and solve your problems egotistically. That’s what you have always done, and it hasn’t worked. Now you must learn faith. Stand back and observe your symptoms without resentment or upset. Realize your role in their creation.
Suffer in dignity the pain of seeing the mess you have helped make. Wait to be repented. Let go and let God. Don’t look to anyone or anything else to relieve your suffering. God will then lift your burden. In due course, He will straighten out your life. In time, some of your loved ones might even come around. In the meantime, do what you can, realizing that you do not deserve grace. Be grateful to be given the power to stand back and observe your wrongs.
.
Read......... Part 1
.
Note: there are so many things nowadays that pull us away from awareness that it is the author's opinion that the sincere seeker must practice our awareness meditation. Moreover, the energy of our own striving pulls us from awareness. Having erred, it is just too easy to struggle and then to slip into daydreams or some comforting music, alcohol, drug or distraction fix. We make the mistake of trying to deal with our own guilts, which only strengthens them and makes us weary. You cannot forgive yourself. You need God's forgiveness and guidance. But you cannot find these in daydreams or external words or rituals. You discover them when you are aware in the Presence in the present. Go to our website to learn more about our awareness meditation and perhaps listen to it. It is free with no strings attached.